A Python Tutorial for the Bored Me—PyderPuffGirls Episode 1

This is the Episode 1 of the PyderPuffGirls†—a tutorial on automating the boring parts of data analysis that we are going through in the next 8 weeks. I’m writing this tutorial for people that had at least one false start in learning Python, just like me two years ago.

A tutorial for people who had a false start?

Where I got the idea

When I learned Python, I looked at several tutorials. Most of them are geared toward software developers—so you learn about data types, control flow (how to if/else and for-loops), classes, and other things that software developers use to build applications.

Most of the time, I’m not writing an application for hundreds or millions of users. I want to automate part of my job so I can reduce the mental load from the boring, manual tasks, and shift my focus to more important things. In other words, I need to write scripts more than I need to write applications.

So don’t Learn Python the Hard Way. Time is precious, why would you learn the hard way first?

The initial cost to start and how far those “tutorials” deviate from the daily data analysis need is probably why I’ve heard of so many false starts of Python among people that I knew. I don’t want to write a f-ing tic-tac-toe—it’s useless for my job and a total waste of my time.

The closest learning resource that fit my need was Automate the Boring Stuff by Al Sweigart. It’s an excellent book, and the online version is free, so I recommend checking it out.

I want to provide a tutorial so everyone that analyzes data and works with Email & Excel can use Python to automate the boring parts away. 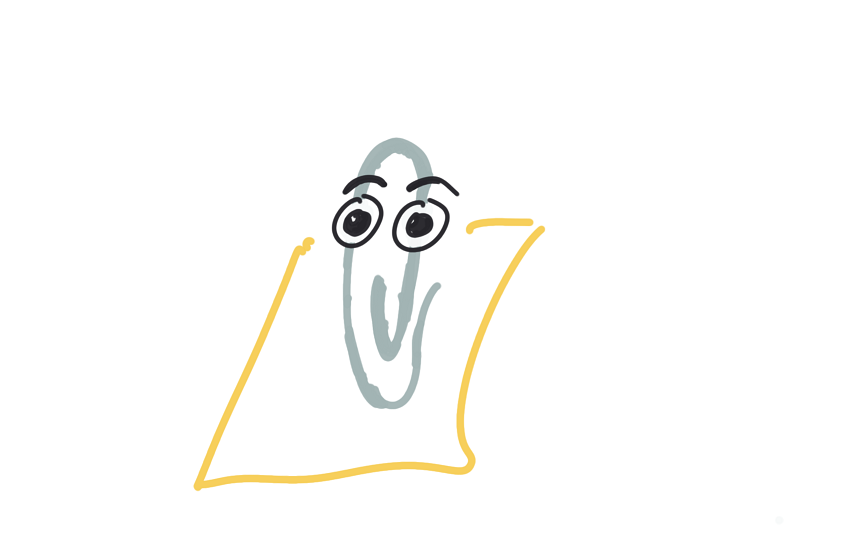 Who doesn’t love a life of Email & Excel?

The goal is, in 8 hours, the attendees will become 8% more efficient. If I code 20 hours per week, then over one year, 8% of efficiency gain means I can save 80 hours. How about using those 80 hours to take more walks and think about problems? Spend less time in front of computers—less eye strain, healthier, and more productive.

This tutorial is for people that analyze data daily, tried Python in the past because it’s hot, but for whatever reason never integrated Python it into their daily workflow.

I will not cover all the details. This is a tutorial on doing. It’s not a class.

My hope is that the examples will mirror some of the most common workflows that can be automated away in an analyst’s life. So by going through this tutorial, you can build a habit of recognizing repetitive tasks and writing a Python scripts to automate them away. The details can wait.

Why Python? What about R?

Here are my two cents: R is great for statistical programming, but Python is a general programming language and one that is much better at manipulating text than R.

I like R a lot. In fact, I still think modern R is a much better tool for the “crunching numbers” part of data analysis than Python. In this tutorial, however, I will focus on the strength of Python—being able to manipulate text and file system easily means you can write a lot of readable code and automate tasks that makes life easier.

Let’s take a look at the history of Python, in Guido’s own words

My original motivation for creating Python was the perceived need for a higher level language in the Amoeba project. I realized that the development of system administration utilities in C was taking too long.

That’s what Python is good at—building efficient tools without taking too much time and effort to code.

What are some tools that we can build, or things we can automate?

In other words, the difference between a person, A, who uses Python and who don’t, B, is that 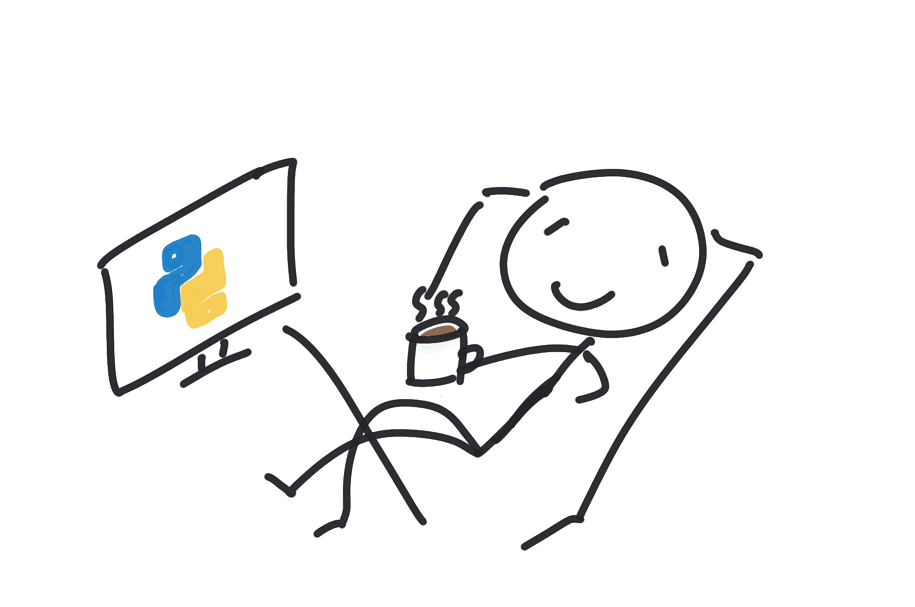 What is good code? I would say that good code is readable code.

A good piece of Python code should be readable, as in reading with sounds. I can almost read through the whole code literally in plain English and understand what the code is trying to do.

Unless I’m running a time-consuming task like training a machine learning model, I would say that writing readable and maintainable code is way more important than writing high performance code. For the tasks I’m going after in this tutorial, human time is much more valuable than machine time.

So in this tutorial, I will try to make the code as readable as possible. Please feel free to suggest a different way of doing things if you think it will improve readability—I am learning too.

Let’s start by working with texts, or in Python terms, strings.

In Python, texts are declared with single and double quotes.

In line 3, I’m testing if the two variables are equal in value—there’s also something called ID, but it’s unimportant here—and they are. The only reason you may want to choose one over the other is when you have to escape quotes

word2 spits out an error,

because Python thought the middle quote is part of the declaration, and it didn’t know what to do with the rest all'.

The good thing about Python is that you can concatenate strings and split them up easily:

The “+” operator concatenates the strings (and hence the missing space in the sentence.)

I can also split a string:

Escape strings starts with a \, this is for putting in special characters.

Some of the most common escapes include:

There is also raw text, defined by prefixing an r and multiline texts, defined by triple quotes—

Anything that follows a pound sign (#, I guess you can call it hashtag too) is a comment in Python.

What about rendering variables in the string?

The action of plugging a variable into string is called “string formatting” in Python.

In some of the online tutorials and StackOverflow answers, you will see people use the C-style formatting with %s and %d etc. This is the “old way” of doing things. Please don’t use that in 2018 unless there’s is a very good reason to. Let’s use f-strings, a Python 3.6 feature which I will introduce when we talk about file manipulation.

In my opinion, when I learn a new programming language, the first thing I want to learn after knowing how to define a variable and run basic computations is to save the result. Computations are useless if they only lives in memory. So, in this section, I will show you how to save files.

Python is great because I can read and write files easily. There are many kinds of files, but one way to categorize files is to see what shows up when we open it with a text editor.

We will focus on plain text files for now.

To handle files, you need to open it as follows. This particular way of opening a file is called a “context manager,” which will take care of closing the file after you do something for you. Otherwise, you will need to open(), write some data, and close() to make sure the change is saved and the file is not corrupt.

There are several things happened in the two lines of code:

To write back to a file

This is what shows in the file: 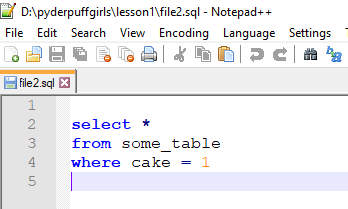 Note that line 1 is empty and the file ends on line 5 because new_query starts with a newline character and ends with another.

For data people, the most common file to deal with are

Note that in Windows, folders are divided by backslash \, which is different from Unix’s forward slash /. This means in Windows you have to use double backslash \\ because the backslash itself is escaped in Python!

For me, I prefer to wrap my path strings around an object from pathlib called Path and let Python handle which platform I’m running on for me. The Path object will automatically use / in Mac and \ in Windows, no matter who is running the script.

Let’s write a SQL query that will always use yesterday’s date.

As an example, let’s say we are working with a NCAA basketball database ncaa. We can prepare a SQL script that

First, we can use the datetime module in Python to get the date for yesterday

When I run yesterday, I see

Running ncaa_query, we see the string is rendered as

Now we can save it to a file

†The name “PyderPuffGirls” came from Keith Finch. Thanks Keith!