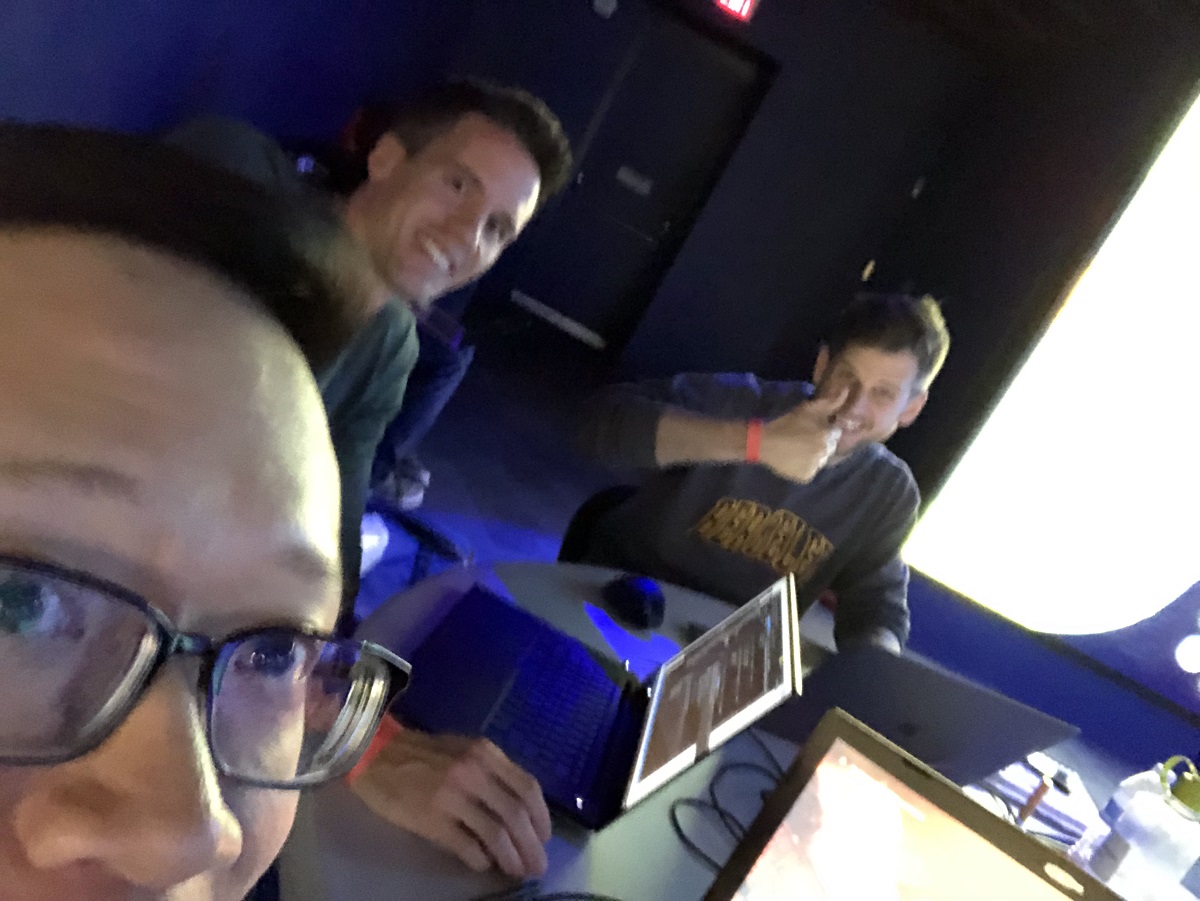 In 2017, I went to my first hackathon, Queen City Hackathon, and had a glimpse on how hackathon works. I went in for learning, and I put the lessons I learned in a previous post in February 2018, My First Hackathon. This time, I teamed up with Stephen Welch and Kurt Dowswell—and we won. So I’ll share what I learned this time as well.

PS. all participants had to wipe the data and code before leaving the hackathon, so I won’t be able to show you what we built.

Before I go to the hackathon, I decided to write a checklist on what to bring and shared with my teammates. This was what I had, word for word from Google Docs:

If I were to start over, I will still bring

Finding an outlet was impossible. Take a look at the power system near our station at 5 AM:

This outlet could very well have been overloaded…

There also wasn’t enough chairs at the venue. The two folding chairs I brought turned out to be a huge boost to productivity. I wouldn’t be able to handle an all-nighter sitting on the floor.

All the items that I brought for sleeping turned out to be useless—we didn’t sleep at all. There were plenty of Red Bulls but coffee ran out very early. If I were to participate again, I would bring a water bottle so I could refill at the fountain instead of walking across the venue to get a few sips.

We were chatting and getting dinner at the venue, and Kurt mentioned that he went to a UX/UI meetup for a design thinking workshop a few weeks ago.

When he mentioned the word design thinking, I was like hell yeahhhhh.

I first learned about design thinking from Code on The Beach last August. One of the talk I went to was Jon Bosworth’s (@jbosworth) talk on how they used design thinking to plan the conference.

Here’s the talk: Validating A Product Before Writing A Line Of Code: A Five Day Design Sprint in 60 Minutes.

It was my first contact with design thinking—and I had been a huge fan of the process since.

For us, we wanted to use try it because we wanted to generate lots of ideas in a short period and validate the usability before getting down to code.

We wanted to design a good solution, but there was a big constraint: we only had about 12 hours to come up with a working solution. How much time should we spend on design? We decided to go slow and spend at least 1-2 hours to work out a plan before we started coding.

To generate ideas, Kurt proposed that we use an exercise from the design thinking called the Crazy Eight.

The exercise was simple: you take a blank sheet of paper, split it into 8 sections, and make 8 sketches on ideas about the topic at hand in 4 minutes. 30 seconds per sketch. It was hard.

Here are my eights: 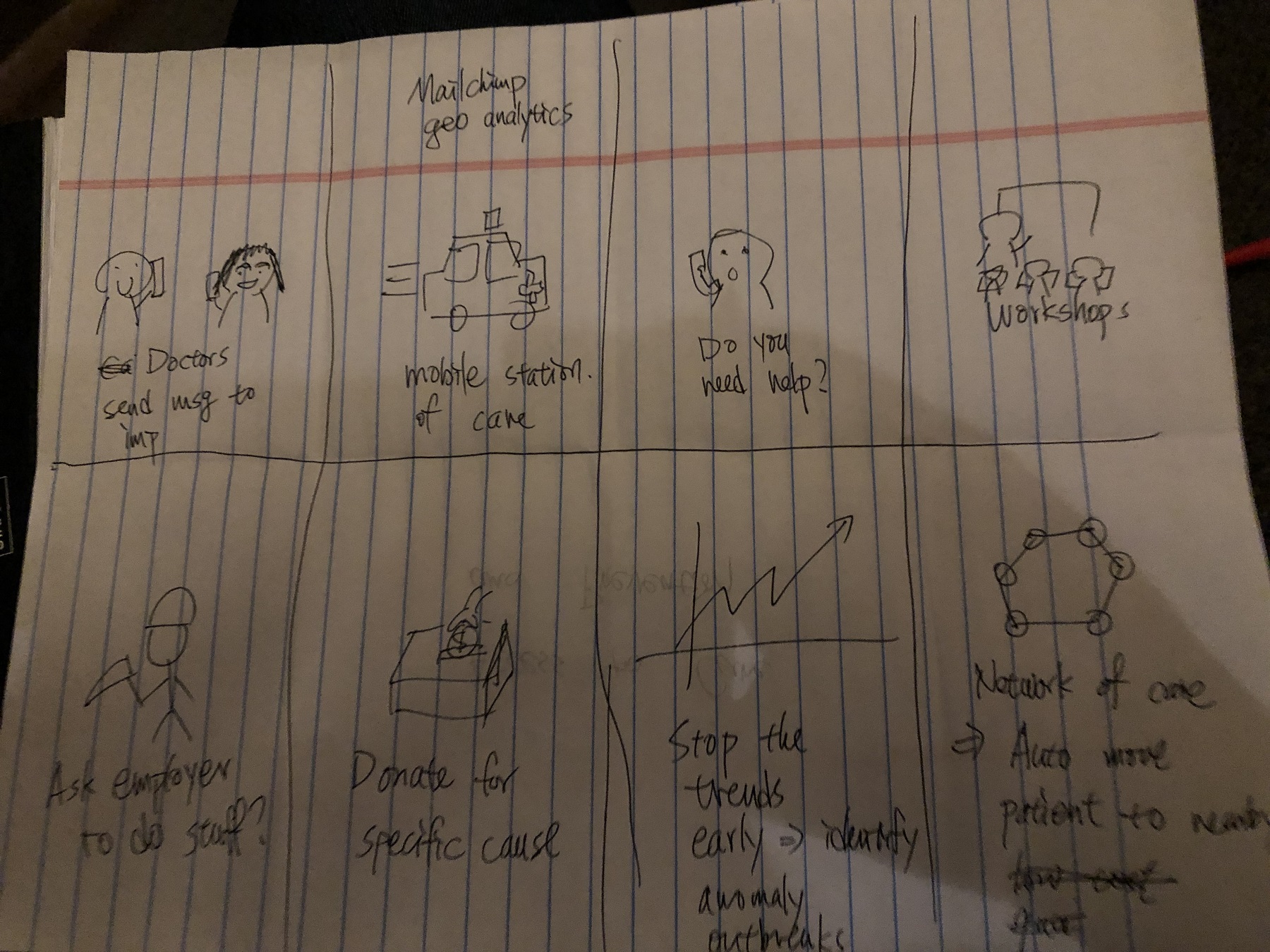 Drawing the ideas on paper led to another 30 minutes-plus of discussion on what we could build. Our final plan emerged at around 11:00 PM. The whole design took us almost 3 hours. But it was a great plan and a story that we could all stand behind.

In no particular order.

A game plan before the event

We have never worked together before, so, during the week before the event, we discussed about what kind of tools each of us were comfortable with and what we can do with it. We also exchanged ideas on what we wanted to build.

None of our ideas was viable for the actual hackathon. For example, we thought about hosting our app on the cloud, but the sensitivity of healthcare data meant we couldn’t host the data anywhere outside of our laptop.

Still, having a premade team meant we got a lot of the coordination out of the way before the event started. In my first hackathon, this step took well over an hour. Getting rid of the communication overhead meant that we could get down to design and code immediately.

Focus on action instead of analysis or model

The dataset we had was from the hospitals and all of them were aggregated. There simply wasn’t much we can do in terms of modeling without domain knowledge on these datasets. No machine learning.

Instead, we focused on answering the question: what are the actions that basic insights from can bring? We decided to compare the data to CDC’s public data to highlight the public health issues in each clinic’s service area so the medical professionals can communicate with patients via text based on this information.

This pattern was similar to what I saw in data science in business: we don’t need complex model to turn data into action.

We planned to integrate our code early. At 2:30 AM, I had to take a walk after I finished my part of code. I was optimistic that we could get it done in an hour or so at that point:

We ended up spending over 3 hours on integration and working on the pitch. We had a great story, but the critical path of the app didn’t work until 5:30 AM, 30 minutes before the submission deadline.

I don’t know if we could actually finish the product and the pitch earlier than we did, but I think the mentality of focusing on shipping the first product out helped.

What makes hackathon worth it? I still think that it was all about learning. What’s the best way to learn? Find great teammates with a diverse range of skill sets.

And then we won. It was an amazing night. 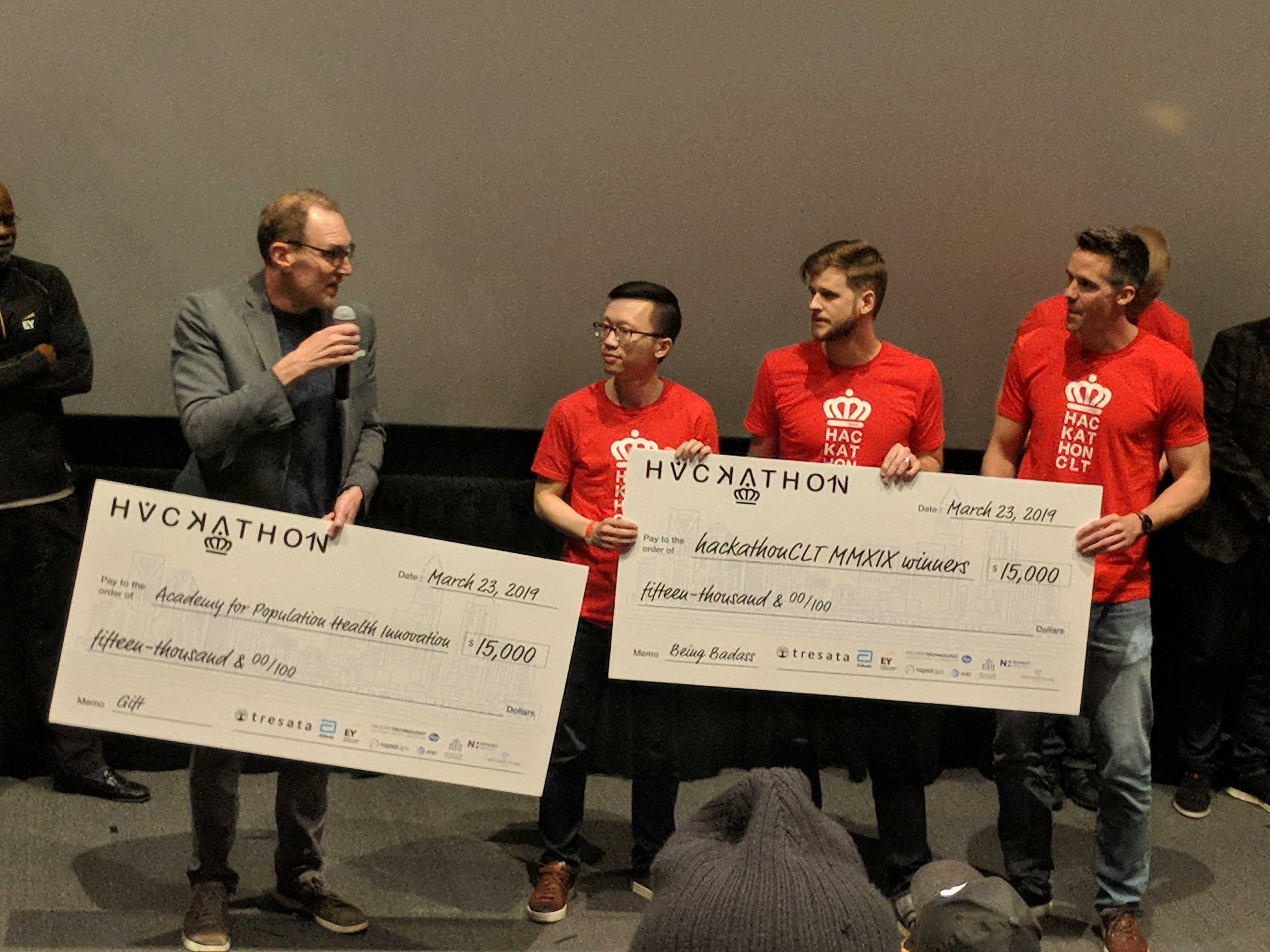