This post follows my previous post How I Learned Data Science Skills as a Math PhD. I said that meetups are awesome but didn’t give my reasons. Here, I am going to share my experience on a particular meetup, the Developer Launchpad Nashville, as an example of why meetups were awesome to me and the roles they played when I was changing career.

The Need for Company

When I returned to Nashville from my summer internship, I had mixed feelings about my future. I became confident that I could make the move to industry, but I also knew that I was far from ready for a data science career. How could I bridge this gap? I started searching for tips on becoming a better programmer. After a while, I came across a Quora question. Under the question were several generic tips and answers, but one answer had a bullet point that I had not seen before — go to meetups.

Meetup was a new concept to me, so I tried to picture it. All I could think of, however, was the intro sequence of Fight Club, where the narrator hopped from one support group to another, surrounding himself with all sorts of people. I knew that professionals went to conferences for growth and networking, but what is a meetup? Who goes to a meetup? What does going to meetups have to do with becoming a better programmer? I was intrigued. 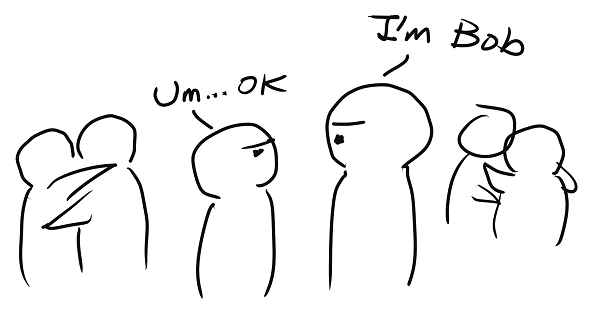 His name is Robert Paulson…

Google led me to meetup.com. Although it sounded like a dating site to me, when I got on it and set my location to Nashville, a full page of local tech meetups popped up: machine learning, data science, Python, Javascript, virtual reality. Having no idea what a meetup was, I RSVP’d for a few that looked interesting.

The first meetup that I went to was the machine learning group. Going to a strange place to meet strangers was scary. I had a hard time getting out of my house and driving to the venue that evening. When I arrived, however, there was food from Pei Wei. After talking with some other first-timers in the line, I felt this meetup thing wasn’t as awkward as I expected it to be. Following the meal was a talk. The content was way above my head, but I knew that if I keep coming back, one day I will understand what the talk was about. I decided to see what’s out there and go to more meetups.

Some meetups in Nashville that I looked into were aimed at junior developers. At the time, the only programming skills I had were MATLAB and R, both at a junior level. I thought I could gain from going to junior developer meetups. Among them, Developer Launchpad (then CodeNewbie Nashville) was the closest one in distance to me, so I RSVP’d for the Saturday coding jam, which was at a coffee shop in my neighborhood.

I showed up late that day. There were already a dozen people in the room. In the middle were two bearded dudes that didn’t look like developers. In fact, they didn’t fit into any of the developer stereotypes I knew in Taiwan. Those two were the hosts for the meetup. I found a table by the window and waited. 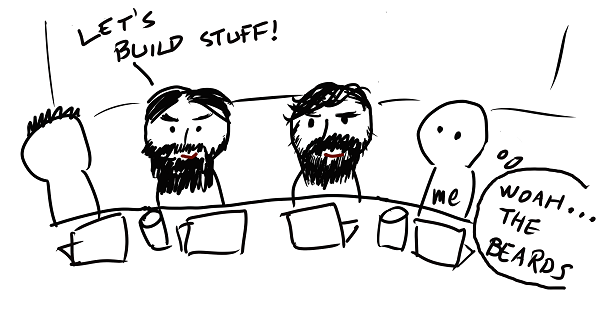 One of the two bearded dudes started speaking about the agenda of the day, and what to expect in the next few weeks. We were going to build a website together. They had set up a Github repository for the project, so as first steps we would:

It was a short list, but the instructions triggered my fear — Github was one of the tools that I had avoided since I picked up programming. Several times I read about why a developer should learn to use Git and Github, but I still couldn’t grasp what Git was for or how to use it. I thought it was a tool for legit developers, not for a beginner groping around like me.

But today was different. Since I’ve committed my time to come, I wasn’t going to sit there and do nothing. I went to another guy in the room and asked for help. I told him that I didn’t understand the instructions at all and needed help. He said he understood my pain — he went through similar troubles when he started at a coding bootcamp — and proceeded to show me everything. We installed and configured Git on my laptop, cloned the repository, edited the markdown, and pushed the changes back to Github in 30 minutes. That was my first push to Github. I went home happy with a sense of achievement. Within 30 minutes of coding jam, I got rid of the fear of Github that I held for 6 months.

Before moving to Charlotte in June 2017, I went to Developer Launchpad meetups every month. We worked on coding challenges together, talked about code, and had many great conversations unrelated to code. Looking back, I didn’t have a sense on how much I had to do to kick-start a new career. The process of reinventing myself was stressful. At Developer Launchpad, I met junior developers who went through or were going through similar processes, and I got to hear their stories. Knowing that there were people fighting the same mental battle — and that people won those battles — kept me going despite all the failures, doubts, and frustrations that came from my job search. It was awesome.

In the next post, I will continue on my meetup experience with another community, the Penny Universty, and how coffee chats helped me get my job.

P.S. The two bearded dudes from Developer Launchpad (@Bowtiebeej and @GantSoftSys) are also hosts for the Complete Developer Podcast. It’s good stuff and I love their episodes on soft skills.