My Job Search as a PhD Student

This post is a review of my data science job search last year. When I started my job search last spring, I tried to read up on other’s experience so I could know what to expect, but they were far and few in between, and even fewer were told from a PhD student’s perspective. It is scary to tread down an unknown path, so I want to share my own experience.

In the beginning, I thought that with my internship experience and a PhD degree, it should be easy to get a positive response. It was pure speculation, however, as I had no data to back the statement.

I would spend 5-6 hours to prepare my resume, cover letter, and sometimes answers to the behavioral questions on the website before I hit the submit button. There were articles on job search on the internet that said applicants should do research on the company they apply for, and I thought that a tailored cover letter would boost my chances. As a result of the long overhead in preparation, I only sent out 10 applications in the first 2 months.

It was the reality check that I needed. I overestimated my odds. My approach had to change. After taking time to think the process through, I came up with a plan and a list of things that I need to do.

1. I need to apply for more jobs

I thought I was a fine candidate, but the data had shown otherwise. At least, in the screening stage of the hiring process, I didn’t stand out among the candidates. I was probably in the middle of bell curve.

If I don’t stand out, how can I possibly win? The conclusion was that I need to become aggresive on my job search — I am going to take the shotgun approach and shoot as many targets as possible.

2. I need to submit faster

To send out more applications in the same amount of time, I need to change the way I prepare my applications. After a quick review, I found that the biggest bottleneck in my process was the cover letter.

So, I decided to run an experiment — I’m going to ditch the cover letters and see what happens. If it turns out that I still don’t get any phone interview, then maybe I’ll start writing them again. I continued my research on the companies and the positions, but my time spent on each application reduced from 6 hours to less than 2 hours.

I didn’t realize at the time when I chose to stop writing cover letters, but my workload increased by a lot in March and April compared to February because I had to prepare for my dissertation defense, so saving time on job applications worked out both ways.

I kept track of all of my applications — how old was the job when I applied, where did I find it, when did I send out and hear back, etc. After sending out another 20 resumes, I started getting calls, and I used this data to see if I can improve my odds. The two job boards I used were LinkedIn and Indeed, and from what I saw,

Therefore, my next 30 applications were all filed through Indeed and only on recent jobs that were less than two weeks old. In hindsight, this stage produce a worse response rate (3 in 30) than stage 2 (3 in 20), but I landed my current job from one of those 30, so it worked out for me.

I could talk about interview as well, but that will best fit into another post.

Some thoughts when I look back

A couple months into my current job, I came across a quote from Cleveland Browns’ general manager, Paul DePodesta, when he was interviewed by Sports Illustrated before the amateur draft in 2017:

I was a little surprised that he admitted the Browns had no better clue than any other club on drafting prospects. The Browns were rebuilding, and they spent a lot of resources in building an analytics department, so I thought they must have learned more about prospects than other clubs, which wasn’t the case. What I really liked about that statement was the fact that even with a lot of unknowns, the club still came up with a practical plan based on the information they had. Maybe one day their scouts will figure out a better way to grade the prospect, but for now, the best course of action is to acquire all the draft picks they could possibly get.

My best course of action that I could come up with was to apply to as many jobs as possible. Instead of spending time researching how should I perfect my applications, odds will be on my side if I trusted the process and applied to as many job as possible. When I collected enough data, then I can go back and improve my process.

If my previous estimate of 10 applications to 1 interview and 10 interviews to 1 offer were correct, then a simulation of 10,000 times says that it could be 60 to 150 applications before I got an offer. 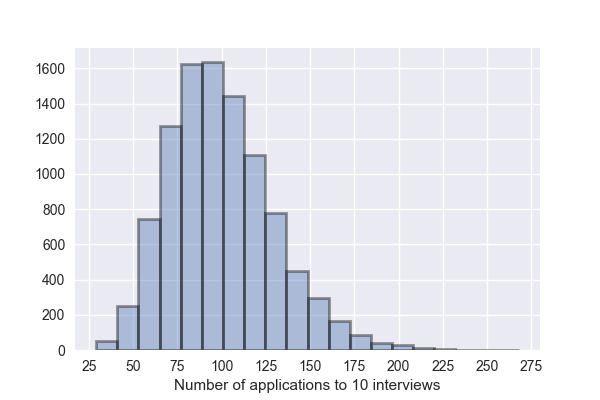 LinkedIn still displayed the number of people applied for each job before summer of last year. As far as I can remember, for data science job postings, the number of applications would hit 150 in two weeks and 300-500 in a month. I personally find the number intimidating, but this number also made me feel less sorry when I got rejected.

If you have any question, feel free to leave a comment or tweet me at @ChangLeeTW and I’ll do my best to answer.